A lot of people are unhappy with the size and/or shape of their nose. The nose is central to facial balance and many people opt for surgical nose reshaping, or rhinoplasty, in an effort to find a more harmonious alignment of their features. Sometimes the problem can be more to do with the position of the chin or jaw, but patients tend to focus their dissatisfaction on the nose. 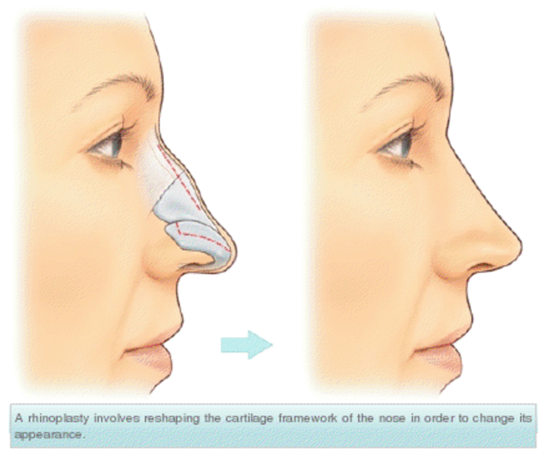 While surgical techniques are advanced, there are limitations as to how much the nose can be altered. Outcomes depend on the size of the nose, the condition of the skin and the age of the patient. The most important thing is that there is clear communication between a patient and a surgeon about what is wanted and what is achievable. Patients should also bear in mind that surgery alone will not solve any emotional or social problems they may attribute to their nose or to their appearance generally.

2. What are the most common reasons for people wanting nose operations?

Most people who dislike their nose have concerns about the bridge or the tip. At the bridge, or dorsum, people often complain about having a hump. Meanwhile, people who want to change the tip often see this part of the nose as being too wide, round, blobby, beaked or lacking in definition. Some people also dislike the length of their nose.

Other patients may opt for a rhinoplasty because of an injury to the nose, whereby the nose may be broken or bent following an accident of some kind. Others may have functional breathing problems relating to the nasal airways. In these cases, surgical interventions would be considered reconstructive, whereas for the majority of nose operations the surgery is classed as cosmetic.

Nose operations are most commonly carried out to:

3. What surgery is available, and what techniques are involved?

If the bridge of the nose is being operated on, the surgeon removes the bone and cartilage that is causing ‘the hump’. The nose may then be broken to allow the remaining pieces of bone to be moved closer together, resulting in the narrowing of the nose.

When the tip of the nose is operated on, the cartilage that makes up the tip-support needs to be partly removed or reshaped. This is done through the nostril, or by making a small cut in the bit between the nostrils (known as the columella) in an open rhinoplasty.

A surgeon can adjust and reduce the central structure of the nose, known as the septum, to help shrink the tip and reduce the overall length of the nose. Adjustment to the tip cartilages also helps adjust nasal length.

By breaking and repositioning the side nasal bone, a surgeon can also reduce the width of the nose and achieve a narrower appearance.

Surgeons can also add to the nose using cartilage grafts from the septum or, occasionally, silicone implants, in what is called an additional rhinoplasty. This type of operation is used to build up a ‘flat’ bridge or tip.

The above techniques can also be used to straighten and refine a nose that has been broken through injury, and to relieve breathing difficulties.

4. Is this surgery available on the NHS?

Surgery to reshape the nose after an injury is sometimes available on the NHS, as is reconstructive surgery aimed at helping a patient to breathe. However, nose surgery that is purely cosmetic, i.e. requested and carried out on the basis of appearance only, is not usually available on the NHS and must be sought privately.

Rhinoplasty operations are conducted by one surgeon with the help of an assistant. Prior to an operation, however, careful examinations will be carried out to determine whether surgery is the right course of action and confirm what can be achieved. Occasionally you may also meet with a clinical psychologist to discuss the psycho-social implications of your appearance and the relevance of nose reshaping to that.

6. What should I expect in terms of treatment, procedures and outcomes?

Operations take between 90-180 minutes, depending on the technique being used. Following an operation, patients usually need to spend one or occasionally two nights in hospital. You will need to have a splint held over your nose by tape for seven days, and a pad under your nose for 12 hours

Allow two weeks off work following a nose operation. In terms of exercise, you should be able to walk a distance after three-to-five days, and to swim after three weeks, although strenuous exercise should be avoided for four-to-six weeks.

If you undergo an open rhinoplasty whereby the columella is cut and the nose-skin opened up, so exposing the cartilages directly during the operation, the surgeon has a better view and this can be more accurate for changes to the tip. However, the swelling will be greater and the recovery time longer.

As with all operations, there are risks involved. After a rhinoplasty, some patients experience an altered sense of smell, while others find that their nasal breathing is affected. Minor bleeding is common while heavy bleeding is very rare but can be severe. Some patients experience pain for a number of weeks. Slight irregularity in the bone or cartilage may be felt or occasionally seen. Some patients will be dissatisfied with the outcome of a nose reshaping operation. Usually it is best to accept what improvement has been achieved and not opt for a further operation. However, it is sometimes reasonable to consider a further slight adjustment. You should establish from your surgeon in advance what the conditions for a re-operation would be, and what any arrangements for payment would be.

For people who return for additional surgery, there is also a risk that the structural scaffolding of the nose could collapse. The nose is a delicate structure, and too much surgery can weaken and damage it.

7. Where should I go for further information or support?