With the advancement of modern surgical techniques, patients requiring ear reconstruction, or any other corrective ear surgery, can now expect good outcomes, with aesthetically satisfying results. As with all surgery, however, there are no guarantees of success, and patients are advised to consult NHS ear specialists via the national centres of excellence when thinking about ear surgery of any kind.

The goal of corrective ear surgery is to restore balance to the face and shift unwanted attention away from prominent or misshapen ears. With fears about teasing at school, parents are often keen to have their children’s ears operated on at an early age. However, a child’s opinion, consent and cooperation are essential to a successful and satisfying cosmetic outcome. For this reason, many surgeons prefer to wait until a child is older to perform ear surgery.

2. What conditions might affect a patient in this area?

The main congenital conditions that affect people’s ears are:

The main acquired conditions are:

Microtia, translated from the Greek, means ‘little ear’, and is the medical word used to describe a small or absent ear in newborn babies. Affecting one in 6,000 live births worldwide, microtia can appear in isolation or as a feature of other syndromes, such as hemifacial microsomia or Treacher-Collins syndrome.

Microtia usually affects one ear only (unilateral microtia), although in 10% of cases both ears are involved (bilateral microtia). The root cause of the problem is thought to relate to an interruption of the blood supply to the affected area about eight weeks after a baby’s conception. Hearing is often impaired on the affected side due to the ear canal being underdeveloped, although a hearing aid is only usually needed in cases of bilateral microtia. What surgery is available, and what techniques are involved?

There are three main reconstructive options available to patients with microtia. The first is autologous ear reconstruction, which means reconstruction using the patient’s own tissue. The second option involves utilising a prosthetic framework covered or buried under the patient’s own skin. The third option is to use an external prosthesis crafted to match the opposite ear and fitted to the side of the head.

The gold standard technique for autologous ear reconstruction is a rib cartilage graft; a surgical intervention that is usually carried out in two or three stages. The first stage of surgery is conducted when a child is between the ages of eight and ten, when there is sufficient volume of cartilage in the chest area. With the patient under general anaesthetic, rib cartilage is harvested via a small incision at the side of the chest in an operation lasting between five to six hours.

Once removed, the pieces of cartilage are then carved and joined together to create a framework replicating a new ear. Based on a map of the patient’s other ear the framework is as close as possible to a mirror image of the opposite ear. Once complete, the new ear structure is buried under the skin at the side of the head. Occasionally if the skin is scarred or the hairline is very low the ear maybe covered by a flap of fascia from under the scalp and a split skin graft. (A flap is a piece of living tissue that is transferred from one part of the body to another, along with the blood vessels that keeps it alive.)

Patients and families should note that in the past surgeons have attempted to use cartilage from mothers and from human donors. The cartilage gradually disappeared and the results were poor. More recently scientists have created ears made of engineered cartilage in laboratory mice. Although promising this technology does not work in humans as the cartilage is too soft.

The newly constructed ear initially lies flush against the patient’s head. Six months later at the second stage the ear is lifted to achieve a normal projection. This procedure takes from 3 to 5 hours and involves inserting a wedge of cartilage behind the ear with fascial flaps and skin grafts used to cover the exposed surfaces.

Sometimes a third operation is required to refine the results or to perform additional procedures such as piercing the lobe or correcting prominence of the opposite ear. Occasionally a course of laser treatment maybe required if there are a few hairs growing on the ear.

Patients also have the choice of prosthetic ear reconstruction. Rather than using cartilage fro the chest some surgeons utilise frameworks made of hard porous plastic material or even silicone. This is buried under the skin or a fascial flap and skin graft in much the same way as the cartilage framework. The reconstruction can be completed in one stage.

The final option is to wear an external prosthesis on top of the skin. A skilled prosthetist can create a very realistic ear using silicone. Pigments are used to give a realistic skin colouration. Patients may even be provided with a false ear for the summer and one for the winter. These external prosthesis maybe secured with special glue or alternatively, patients can opt for a more permanent bone-anchored prosthesis. This type of false ear is secured via two or three small titanium implants which are embedded into the bone at the side of the head over the course of two operations

The ears are one of the first parts of the body to reach adult size. When the ear projects excessively it can be regarded as prominent. Around 2% of the population feel that their ears stick out too far. The problem is often inherited, and is caused by a lack of the usual cartilage folds in the ear. 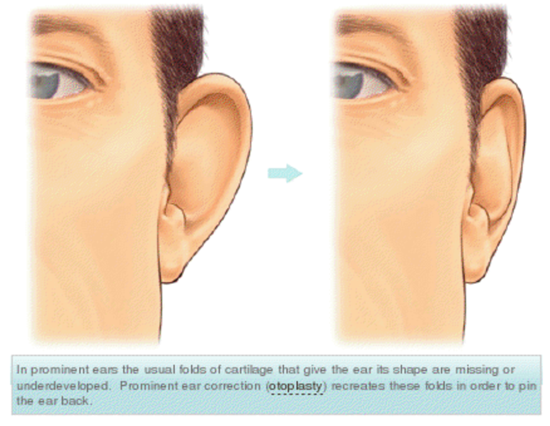 Most cases of prominent ears, become a problem in early childhood, often relating to teasing at school. Most surgeons advise that surgery for prominent ears is not undertaken until the child is old enough to understand what the surgery involves. At this stage the child is more likely to be cooperative and happy with the outcome. In addition one must consider that not all adults with prominent ears wish them to be corrected. Therefore if one operates on children prior to the acquisition of understanding a proportion will have been subjected to unnecessary surgery. For this reason, and because ear cartilage is often soft in the early years, operations for prominent ears are rarely performed on children under the age of five.

Cryptotia means ‘buried ear’. This is a relatively rare deformation in which the groove behind the ear is not fully formed. This is aesthetically displeasing and can cause difficulties in wearing glasses. This condition can occasionally be corrected using splints but more commonly is corrected surgically around the age of 5.

A variety of other ear deformations such as ‘Stahls’ bar and constricted ears are well recognise entities which maybe corrected by splinatge otoplasty or ear reconstruction. What surgery is available, and what techniques are involved?

The cartilage in a baby’s ear is very soft and malleable, and can be moulded with the use of splints if prominent ears are obvious from birth. Splints are fitted into the outer groove (scaphoid fossa) of the ear and fixed by strips of tape, with the ear then taped to the side of the head using a broad strip of tape. The pressure of the splint corrects the tendency of the ear to stick out, while maintaining the proper contours of the ear. To be effective, splints can be required for as little as two weeks in newborn babies, or for up to four months in babies aged six months or over. However, parents should be careful with babies over the age of three months, as the splints themselves can present a choking hazard.

Otoplasty is the term used to describe the surgical correction of prominent ears. Most surgeons recommend that this operation in not carried out until a child’s ears are fully grown, which is usually around the age of eight. Some doctors will argue that the child should be left to decide for themselve. There is no right or wrong answer to this issue each child should be treated individually.

The surgery involves a general anaesthetic for children, although adults may be operated on under local anaesthetic only. During the operation, a cut is made behind the ear close to the groove between the ear and the side of the head. This incision exposes the cartilage, the ear maybe set back by scoring the front surface to weaken the cartilage, removing a small piece of the cartilage bowl (concha) or by inserting some stitches at the back of the ear to reshape or to rotate it closer to the head. Once this is done, the skin is closed with a stitch and a protective bandage or head garment is usually applied.

The loss or damage of ears through trauma is now more common in UK than ever before and sadly more common than in any other country. Most ear-trauma injuries are caused by biting, but some are also due to sharp lacerations. Attempts to replant ears in an emergency environment often yield poor results. Following a surgical ‘tidy up’, the damaged area is left to heal, and is then reconstructed using the same surgical methods described above for the treatment of microtia.

Acute swelling of the ear following trauma is usually due to a collection of blood clot (haematoma) under the skin. This should be dealt with as an emergency by surgical drainage through a small skin incision. In neglected cases the blood can become scarred and calcified leading to a thickened so called ‘cauliflower ear’. Such deformity is common in boxers and rugby players Surgeons usually recommend that patients finish their sporting careers before seeking treatment. Treatment usually requireselevating the skin from the front of the ear and thinning the calcified thickened tissue to recreate the ear shape. A compressive dressing is applied.

Infections of the ear, often relating to piercings, are treated on a case-by-case basis. Unfortunately piercing of the cartilaginous part of the ear can result in late infection and loss of ear structure. This may then necessitate ear reconstruction with rib cartilage. Skin cancer of the ear is usually treated by surgical excision and reconstruction, as described in the head and neck cancer section of this website.

8. Where should I go for further information or support?